++Addition++Agnostic posted something similar back in January, but due to my apparent gayness, the following adds to it by injecting gender into the relationship between sexual activity and age.

There are several different ways to estimate at what age physical attractiveness peaks among men and women. For my part, looking at Maxim’s Hottest 100 list of 2008 shows an average age of 27.6 years. That’s probably too far to the wizened end, since building up celebrity credentials at such a high level tends to require a little time after initially being discovered. Agnostic looked at the age of porn actors and found an average of 22.8 years. Because there is an artificial floor at 18 (despite the existence of hot 16 and 17 year-olds), even that is probably a little on the high side, although not by much.

The GSS provides more suggestive evidence backing up Agnostic’s finding. The following graph shows the average number of sexual partners in the last year for unmarried respondents*. Female responses (pink) are scaled so that they are comparable to male responses (blue)**. For ease of presentation, age ranges represent early-ies, mid-ies, and late-ies (click for higher resolution): 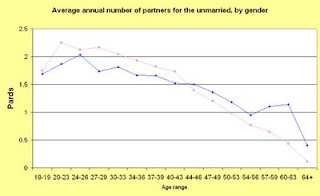 Women are at the peak in their early twenties. The absolute highest point is reached at age 23, which catches some of 22 as well, since the question inquires about activity over the last 12 months. They decline slowly but steadily from their mid-twenties to their early-forties and then tank as they stare down menopause.

A smile of the sweetest flower, now wilted, soiled, and soured. Agnostic has commissioned a poster appropriate for the subject at hand: * I am using the number of partners over the last year as a proxy for physical attractiveness (as well as libido, to which it is related). People who are married are filtered out so that only those playing the field are counted. It’s obviously not a perfect approach–when it comes to quantifying physical attractiveness, that always seems elusive. On the individual level, it’s not worth much. In aggregate, however, it seems like a good measure. It certainly has face validity.

The y-value is not exactly the mean number of reported partners for men, as response categories enter into ranges from five and up. Participants who have had five or more partners in the last year comprise less than 4% of the total.

** Men consistently report having more sexual partners than women do, despite the mathematical impossibility this presents (homosexuality cannot plausibly explain the entire gap). The Tide Is Turning Against "Gender Studies"âJust Not Fast Enough
Lance Welton
• 131 Comments • Reply
← Trends in Public Opinion on Seven Major...If Gaming Is Good, Is Prostitution Even... →
Hide 20 CommentsLeave a Comment
"Gauging Attractiveness by Age Via Sexual Activity"
• 20 Comments
Commenters to Ignore
Commenters to ignore (one per line)

Save ListCancel
Endorsed Only
Trim Comments?
← Trends in Public Opinion on Seven Major...If Gaming Is Good, Is Prostitution Even... →