++Addition++Jason Malloy shows that the improvement is one more of words than of actions:

Cheating doubled for men between the 1900 and 1940 cohort, but quadrupled for women. They apparently had to move faster to catch up.

All those corny 50s kids on Leave it to Beaver grew up to be the most debauched generation.

The answers on XMARSEX also reflect this generational difference, with the SexRev cohort saying it is the least wrong. The post SexRev-ers are bigger hypocrites though. Their moral answers are almost identical to the 1900-1919 cohort, even though they cheat a whole lot more. The numbers above don’t indicate the youngest generation are getting better behavior-wise, even if they are high in moral lip service.

Hypocritically censuring a pathological behavior that is engaged in is still an improvement over embracing that pathology.

A month ago, Inductivist revealed a “moral recession” among young Americans by pointing to the increased acceptance of homosexual relations, a drop in church attendance, and a growing acceptance of abortion for any reason (it’s difficult to detect this last one in the data he presents, however) over time. From a socially conservative point of view, these trends are surely disheartening.

But there is a bright spot regarding an issue that is less poralizing–the declining moral acceptance of extramarital sex. The following graph includes the same age range of 18-29 examined by Inductivist. The first year presented is 1973, with responses for every year or two after that, ending with 2008. The average annual sample size is 348. 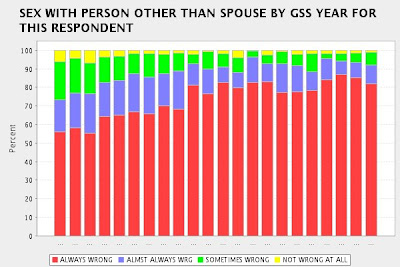 Agnostic has repeatedly argued that sexual promiscuity (or as he terms it, “slutiness”) among the young has been trending downward for years. It looks like that holds not just in terms of actual behavior, but also in professed beliefs of what constitutes acceptable sexual behavior in the first place.

(Republished from The Audacious Epigone by permission of author or representative)
← How to Scale the Social Crags of an Age...Extramarital Sex Wrong? Gays and Suppor... →
Subscribe to New Columns
Tweet
Reddit
Share
Share
Email
Print
More
• Tags: Ethics and Morals, GSS, Western revival
Recently from Author
Related Pieces by Author
Of Related Interest

Save ListCancel
Endorsed Only
Trim Comments?
← How to Scale the Social Crags of an Age...Extramarital Sex Wrong? Gays and Suppor... →