Reading Steve Sailer’s movie review of Dawn of the Planet of the Apes, the sequel to the 2011 Rise of the Planet of the Apes, I expected a mindless, gory, action-packed allegorical illustration of oppressive white America on the receiving end of righteous reprisals administered by the recently liberated non-whites, a la Django Unchained, with a laconic existence among the wildlife of the redwood forests thrown in for tranquil good measure.

With that in mind, I was pleased by the insinuated realities of social dynamics in contemporary America. While the sequel wasn’t as thoughtful or layered as the movie that preceded it, Steve’s criticisms might be a bit exaggerated. He writes:

In Muir Woods [the surviving humans] discover a vast colony of intelligent apes building a civilization out of sharpened sticks. Chimps, gorillas, and orangutans live as one. 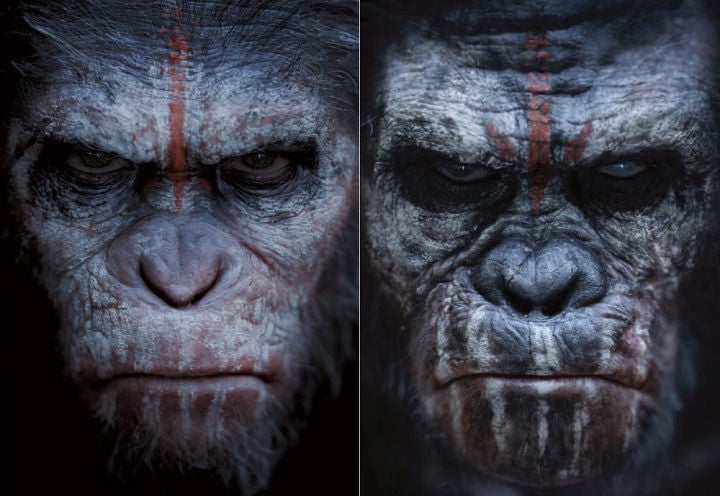 Chimp and bonobo, which is which?

I counted a single orangutan and one or possibly two gorillas, compared to hundreds and hundreds of chimpanzees. The orangutan was the same kindred spirit from the first movie, with no indication that a decade on he had contact with any other orangutans, let alone a family. The presumption is that once he’s gone, there will be no orangutan representation at all among the chimp colony. The same appears to be the case for the gorilla (or two). Koba, Caesar’s vicious and fearless Mark Antony, is, bizarrely, a bonobo, though the vast majority of viewers are not going to notice as much since it’s difficult for a non-specialist to pick up on the subtle morphological differences between chimpanzees and bonobos.

It’s a colony of chimps, not a multicultural colony of great apes. The surviving San Franciscans, in contrast, appear to be more NAM-diverse than the actual city of San Francisco was at the time of civilizational collapse following the spread of the “simian flu”.

Each of the primary protagonists, Malcolm on the human side and Caesar on the chimp side, show a mutual appreciation for the concerns the other has and for the society he represents. They express a genuine hope for coexistence (although only of a segregated, not integrated, coexistence). If all the members of their respective species had similar personality profiles, perhaps such coexistence would be possible. Despite their best efforts, however, they are powerless to overcome the broader primate natures of the species they represent. Their quixotic attempts at reconciliation flounder catastrophically.

The aspirations Malcolm and Caesar have for their respective species aren’t for chimps and humans to hold hands and sing kumbaya. The goal is far less ambitious: Separate, mutually exclusive sovereignties where the only social mixing permitted is for the maintenance of crucial infrastructure (the dam). Further, among the upper echelons of human power, racial diversity is quite workable. The bureaucrats scheming in Turtle Bay feel closer to the other bureaucrats they scheme with than they do with the commoners from the countries they putatively represent.

Unlike our starry-eyed (or recklessly cynical, take your pick) elites, however, Malcolm and Caesar are sagacious enough to realize the limits of their feeble abilities to remake their species into something each is not, and so as the movie ends the two sides prepare for the inevitable destructive dysfunction that a polyglot mishmash of peoples (or primates, as it were) leads to.