I was under the impression that the phrase “global warming” had been progressively phased out in favor of the all-purpose “climate change”, a la Michael Crichton’s novel State of Fear (p314):

“Let me explain how you are going to solve your problem, Nicholas. The solution is simple. You have already told me that global warming is unsatisfactory because whenever there is a cold snap, people forget about it.”

“So what you need,” Henley said, “is to structure the information so that whatever kind of weather occurs, it always confirms your message. That’s the virtue of shifting the focus to abrupt climate change. It enables you to use everything that happens. There will always be floods, freezing storms, cyclones, and hurricanes.”

I am obviously not qualified to speak authoritatively on long-term climate variations and their causes. Even if the catastrophic anthropogenic global warming narrative is accurate, it would still behoove activists to employ verbiage that doesn’t cause skepticism or even welcoming of the putative disaster during unseasonal blizzards and cold years (or currently, relatively cold decades).

It does appear that CG is supplanting GW as the phrase of choice for environmental activists, but it has finally become king in just the last several months. A graph showing the number of articles by year in the New York Times containing the respective phrases, adjusted for the total number of articles annually produced (click for higher resolution) follows. 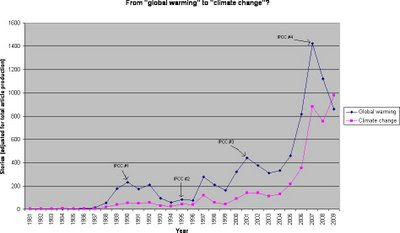 There are periodic spikes coinciding with the release of three of the IPCC’s four assessment reports, released in 1990, 1995, 2001, and 2007. The decline in media attention from 1993 to 1996 bucks this pattern. The time period corresponds to a drop in coverage of ozone depletion from its peak in 1991. Additionally, the second IPCC assessment’s report for policymakers was criticized by lead authors for apparently differing from what the body of the assessment suggested.

Through the turn of the century, as the alarm was sounded more frequently, “global warming” was consistently employed as a descriptor about three times as often as “climate change” was. During the eighties, GW’s usage rate was 315% of CC’s. During the nineties, the trend was almost identical–GW usage was 308% of CC’s. While the usage gap remained pretty steady, the usage of both continued to grow (excepting the momentary mid-nineties dip) as they became an evermore established part of the popular lexicon.

Up to February 13 of this year, it has been employed more frequently than GW. As the winter of 2007 in the southern hemisphere and the ’07-’08 winter in the northern hemisphere were both particularly chilly (it snowed last January in Baghdad!), in tandem with substantial increases in Antarctic ice sheets, the shift in emphasis has utility.

Tangentially, global cooling never received media attention comparable to that given to GW/CC. The NYT only employed the phrase once in the eighties, and its archives before that time (extending back to 1851) return a grand total of six articles. There was not a scientific ‘consensus’ on the reality of global cooling in the seventies to correspond to the GW/CC consensus today.