The previous Open Thread is approaching 900 comments and reportedly getting a little sluggish, so here’s a new one for the Karlin Community. 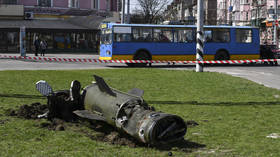 Save ListCancel
Endorsed Only
Trim Comments?
• LOL: Yahya, Pharmakon
• Replies: @Wokechoke
@APTheyâve not been Saran wrapping anyone to lampposts, nor have they pulled their pants down to whip them with knouts, like the Ukrainian Police have been doing.

Most of the Russophones will be released when they see a Chechen in Mariupol after what seen of the police methods by the Zelenskyyites.Replies: @AP
, @Beckow
@APYou are caught up in the minutia. Chechens are a net plus for the Russian side. In 2000-2005 'experts' predicted that Chechnia will never be subdued, a permanent bloody conflict, etc... What happened? These expert predictions are self-serving bs and as always the Western media is chock-full of them. Don't buy it, think for yourself.You took a 40-60 guess that Kiev will win. It depends on how we define a win: if there is no NATO in Ukraine, Donbass separates, and Russia controls the Black See coast - who won? Paraphrasing Pyrrha after he "beat" the Romans: "one more win and there will be no Ukraine."You boast that the Ukie army has not collapsed. First, it is early, one month into it, most wars are 3-6 months affairs or longer. Disciplined armies don't collapse, soldiers have lack of agency and know less than we do: it is dangerous to surrender and most fighting is sporadic, why risk anything? They should stay alive, they are dying for nothing, for a piece of paper and others' deluded propaganda. Nobody will look back in pride at these pointless sacrifices. Why die in Donbass, are they going to move there after the war? They care so much for what language is used there? To die for a principle that NATO be free to in theory place missiles there at some point in the future - this is madness, literally one of the dumbest wars in history.You are wrong about the supersonics, it happened and it can happen again. Like a Don Quichotte stuck with an obsessive idea fixee you double down on hope. Hope is the emotion we experience when we are losing. Maybe you are waiting for the Polish (NATO) cavalry to reverse Molotov-Ribbentrop Pact and march into Galicia. It could happen, but then what? It would put a stake in Ukraine as a country or trigger a miscalculation and we all perish. Why is it so hard to convince people to just live. Don't do the dirty work for others, they don't care that much for you.Replies: @AP
, @Commentator Mike
@API got this

Hmm... this page doesnât exist. Try searching for something else.