Some populations are more adapted to vegetarianism than others.

Long chain polyunsaturated fatty acids (LCPUFA) are bioactive components of membrane phospholipids and serve as substrates for signaling molecules. LCPUFA can be obtained directly from animal foods or synthesized endogenously from 18 carbon precursors via the FADS2 coded enzyme. Vegans rely almost exclusively on endogenous synthesis to generate LCPUFA and we hypothesized that an adaptive genetic polymorphism would confer advantage. The rs66698963 polymorphism, a 22 bp insertion-deletion within FADS2, is associated with basal FADS1 expression, and coordinated induction of FADS1 and FADS2 in vitro. Here we determined rs66698963 genotype frequencies from 234 individuals of a primarily vegetarian Indian population and 311 individuals from the U.S. A much higher I/I genotype frequency was found in Indians (68%) than in the U.S. (18%). Analysis using 1000 Genomes Project data confirmed our observation, revealing a global I/I genotype of 70% in South Asians, 53% in Africans, 29% in East Asians, and 17% in Europeans. Tests based on population divergence, site frequency spectrum and long-range haplotype consistently point to positive selection encompassing rs66698963 in South Asian, African and some East Asian populations. Basal plasma phospholipid arachidonic acid status was 8% greater in I/I compared to D/D individuals. The biochemical pathway product-precursor difference, arachidonic acid minus linoleic acid, was 31% and 13% greater for I/I and I/D compared to D/D, respectively. Our study is consistent with previous in vitro data suggesting that the insertion allele enhances n-6 LCPUFA synthesis and may confer an adaptive advantage in South Asians because of the traditional plant-based diet practice.

Here is a map: And from the supplementary notes, a more detailed table showing the I/I values for the populations in the 1000 Genomes Project study (population key): There is a distinct correlation between this and meat consumption:

To be sure, Africa’s and India’s poverty play a big role, but compare, say, Vietnam and India, whose GDP per capita have tracked each others almost perfectly since the 1980s. But annual meat consumption per capita in Vietnam in 2009 was, at 49kg, more than ten times as high as India’s 4.4kg. The I/I figure for South Asia was 70%, one of the world’s highest, to Vietnam’s 8%, one of its lowest. Although one might rejoinder about Hinduism’s aversion to meat consumption, that applies universally just to beef; strict vegetarianism is prescribed only for members of the priestly Brahmin caste. In any case, one has to ask why such a religious taboo evolved in South Asia but pretty much nowhere else. And why Pakistan, despite being slightly wealthier than Vietnam until the past decade (though admittedly much less socially developed), nonetheless also has, at 15kg per annum, significantly lower meat consumption than Vietnam.

Amongst East Asians, I/I values are much higher amongst northerners, which is an inversion of the global pattern: Beijing Chinese – 48%; Japanese – 54%; Southern Han Chinese – 22%; Vietnamese – 8%. Any ideas why that might be the case? This is pretty strange, because northern Chinese peasant fare is not too dissimilar from what you’d find in traditional Eastern Europe. This does however seem to be borne out by cultural patterns: A quick search shows that Hong Kong has the world’s highest beef consumption, and Vietnamese cuisine is notably beef heavy.

This also illustrates the dangers of adopting vegetarianism as a dietary fad for populations with no biological adaptations to them. Maybe this is at least one form of cultural appropriation we could do without? 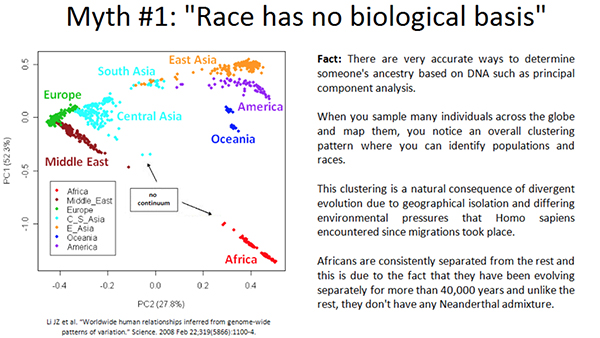 The Genetics of the American Nations
JayMan
• 101 Comments • Reply
← How I Learned to Stop Worrying About Sk...Millionaires Flee Sinking Europe →
Hide 52 CommentsLeave a Comment
"Indians More Adapted to Vegetarianism"
• 52 Comments
Commenters to Ignore
Commenters to ignore (one per line)

Save ListCancel
Endorsed Only
Trim Comments?
← How I Learned to Stop Worrying About Sk...Millionaires Flee Sinking Europe →