Polish politician, journalist, and well-connected think tank man RadosÅaw Sikorski claims the US is behind the pipeline sabotage
◄►Bookmark◄❌►▲ ▼Toggle AllToC▲▼Add to LibraryRemove from Library • BShow CommentNext New CommentNext New ReplyRead More
ReplyAgree/Disagree/Etc. More... This Commenter This Thread Hide Thread Display All Comments
AgreeDisagreeThanksLOLTroll
These buttons register your public Agreement, Disagreement, Thanks, LOL, or Troll with the selected comment. They are ONLY available to recent, frequent commenters who have saved their Name+Email using the 'Remember My Information' checkbox, and may also ONLY be used three times during any eight hour period.
Ignore Commenter Follow Commenter
Search Text Case Sensitive  Exact Words  Include Comments
List of Bookmarks

There is no other possibility.

Russian Foreign Ministry spokesperson Maria Zakharova has asked who the EU intends to punish with the âstrongest possible responseâ for damage to the Nord Stream gas pipelines.

The diplomat said Polandâs former foreign minister has already identified the US as the party behind the apparent sabotage. Radoslaw Sikorski is well connected to Washington elites through his employment at various think tanks.

The two Nord Stream pipelines were seriously damaged this week in what is suspected to have been a deliberate attack.

Paramount to now investigate the incidents, get full clarity on events & why.

Any deliberate disruption of active European energy infrastructure is unacceptable & will lead to the strongest possible response.

On Wednesday, Zakharova asked who exactly the warning would apply to.

âI donât get it. MEP Sikorski thanked the US for what had happened, so whom is Ursula âthreateningâ there?â she wrote on social media.

Zakharova was referring to the reaction to the incident by Sikorski, now an EU lawmaker, who posted a photo of the site where the explosions occurred on Twitter with the words: âThank you, USA.â He described the incident as a âspecial maintenance operation.â

Sikorski added that âthereâs no shortage of pipeline capacity for taking gas from Russia to Western Europe, including Germany,â referring to the Yamal-Europe land pipeline that goes through Belarus and Poland. After the damage to the Nord Stream strings, Russian President Vladimir Putin âwill have to talk to countries controllingâ the alternative route to resume supplies, he predicted.

Zakharova earlier asked if Sikorskiâs tweets amounted to an âofficial statement that this was a terrorist attack.â Meanwhile, Dmitry Polyanskiy, the Russian deputy ambassador to the UN, thanked Sikorski for âmaking it crystal clear who stands behind this terrorist-style targeting of civilian infrastructure!â

The Ukrainian Jews came out and blamed Russia for the pipeline attacks, which means the Ukraine probably did it themselves. The Ukraine has been obsessively pushing this âfalse flagâ stuff whenever they do terrorism, so I think itâs safe to assume that whenever they blame Russia for something that benefits them, they did it.

Of course, bombing a pipeline is a pretty complicated sabotage operation â much easier than say, blowing up someoneâs car â so itâs possible it was done by the US.

Itâs notable that the US and NATO are doing drills in the Baltic Sea right now. Itâs kind of a weird coincidence. 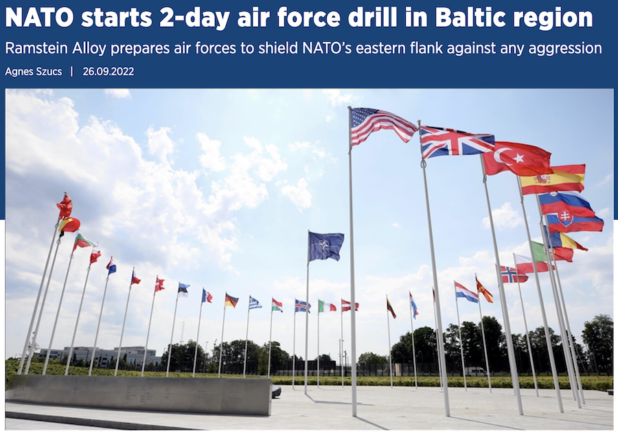 The Crisis in Ukraine Is Not About Ukraine. It's About Germany
Mike Whitney
• 741 Comments • Reply
← NYC: Homeless Black Previously Convicte...Remote Controlled Explosives Probably U... →
Hide 90 CommentsLeave a Comment
"Russia Says US Probably Sabotaged the Pipelines!"
• 90 Comments
Commenters to Ignore
Commenters to ignore (one per line)