Tucker: "Why the emphasis on Ukraine's border and not ours?" pic.twitter.com/Ud0rP5A3OM

Earlier this week, Tucker Carlson experienced a bizarre interview with Ohio Congressman Mike Turner, who is calling for a war with Russia to protect anal-oriented democracy in the Ukraine.

It was really a staggering thing, what this guy was saying. Tucker kept asking him why Americans should go fight and die for democracy in the Ukraine, and he just kept saying that itâs our duty to defend democracy. He also said that Joe Biden isnât doing global democracy hard enough, and that the failure to establish democracy in Afghanistan is proof that we need to go to war with Russia.

He further said that he is not actually talking about going to war with Russia, he just wants to send troops to the Ukraine to stop a war with Russia.

President of Ukraine Zelensky in video address says that Ukraine got intelligence from partners on alarming movement of Russian military near borders. Compared Russian aggression to COVID. Warns not to spread panic helping Russian in informational war pic.twitter.com/SXTbNnu1xA

Itâs all just such bullshit. As any long-time reader of this site is aware, the democratically-elected president of the Ukraine was overthrown in a coup organized by the US State Department and the EU in 2014. These people were literally paying Ukrainian thugs and neo-Nazis 50 euros a day to riot and attack the cops. Then there was a conspiracy involving the shooting of ZOG-backed rioters by a secret assassin who was never arrested. The people organizing the protests said that the government had ordered the assassinations, and the rioters rushed the government buildings and overthrew the elected government. Then a new entirely Jewish government was established by the West.

But even if it was true, and itâs a real democracy â so what? Who cares? Do you care?

Tucker went off in a different direction saying Russia should help the US fight China, which is a strange take. But before that he said that Russia is the country with the natural resources who could be a good trading partner, and we should care more about that than how much democracy the Ukraine has.

Turner must have said the word âdemocracyâ 50 times in 7 minutes. I just donât know who this is supposed to appeal to. Have you ever in your life met someone who said âthe US needs to fight more wars in order to spread democracy across the planetâ?

These government people live inside an echo chamber, and the mass bannings of everyone, and the attacks on protests by Antifa, have ensured that nothing can ever get inside of that vacuum-sealed chamber.

Russia is indeed massing troops on the border â but theyâre doing that in response to constant threats from the Ukraine and from the US military. The media is covering up how aggressive the US military has become under Joe Biden. These people are threatening every country, and menacing them with war machines.

Russiaâs deputy U.N. ambassador said Thursday that Moscow will never invade Ukraine unless it is first provoked by its neighbor or someone else, then cited what he called many threats from Ukraine and provocative actions by U.S. warships in the Black Sea.

Dmitry Polyansky was responding to a question about the buildup of troops along Russiaâs frontier with Ukraine, which has led to stepped up U.S. pressure and an assurance Wednesday from Secretary of State Antony Blinken to the Ukrainian foreign minister that the American commitment to Ukraineâs security and territorial integrity is âironcladâ and will not change.

Polyansky was asked if Russia planned to invade Ukraine.

âNever planned, never did, and never going to do it unless weâre provoked by Ukraine, or by somebody elseâ and Russiaâs national sovereignty is threatened, he replied.

âThere are a lot of threats coming from Ukraine,â Polyansky quickly added. âAnd donât forget that the American warships around the Black Sea acting very close.â

âSo, every day is a very difficult day to avoid direct clash in the Black Sea. We warned our American colleagues that this is a real provocation,â he told reporters at U.N. headquarters.

Mike Turner signed a letter urging Joe Biden to send troops in to combat this threat from Russia.

Hope you enjoyed our interview with Rep. Mike Turner. He wants to send troops to Ukraine to protect its âterritorial integrity.â

He doesnât feel as strongly about our own border. In 2019, he opposed using defense funds for a wall on the southern border.https://t.co/nC6pnNXbDw

Why would anyone care about that?

Woah. Video of #Russia-n tanks transported to #Ukraine border in city of Voronezh on Thursday. 

US warned EU that Putin may be planning an invasion of Ukraine (Bloomberg); head of CIA was just in Moscow: pic.twitter.com/r9Lhf6fngv

The reason, of course, is that these people like Mike Turner are paid shills who get money to promote an anti-American agenda. They view the American military as feeder pigs who can be slaughtered on a whim in order to promote the agenda of Jewish globalism.

You can go straight over to Mike Turnerâs campaign contributions page, and find that the majority of his donors are âdefenseâ manufacturers. 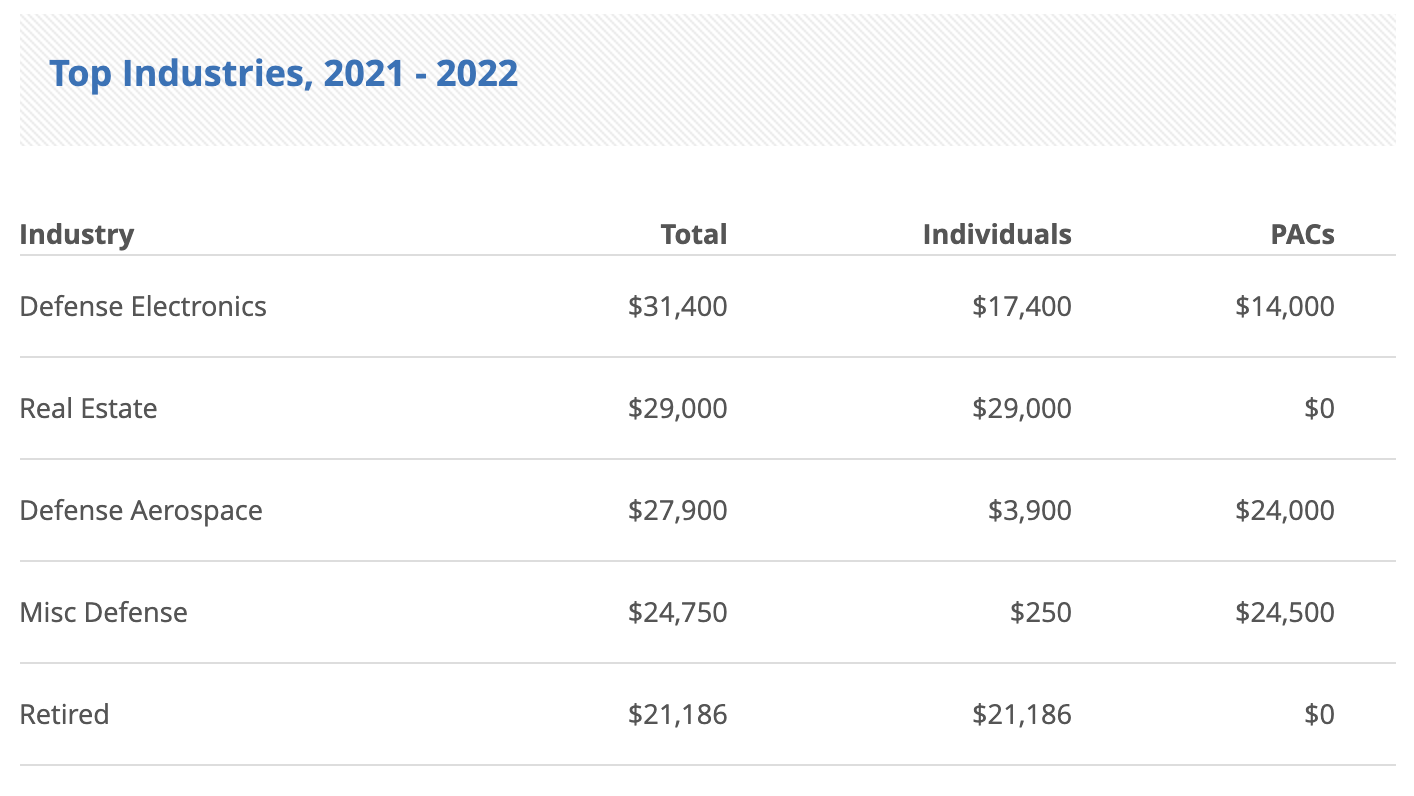 So, this is just an absurd and borderline farcical type of corruption. He literally gets paid to promote wars, and you can easily confirm in five seconds that he gets paid to promote wars, and yet youâre supposed to turn on the TV and see him promoting wars and believe that he is doing that because he just really thinks that itâs very important to have democracy in the Ukraine.

By the way, those are obviously small dollar amounts. But the way this works is that these people put someone into office, then based on their performance in office, give them very serious sums (millions of dollars) when they leave Congress. Campaign contributions are just down-payments. The big money comes from speaking engagements and executive positions in companies after they serve their term.

But even if we were just talking about low six figures â he is still being directly paid that money by defense companies to promote wars. Itâs ridiculous and stupid.

Note that Turner is exactly on the same page as the Democrats. This is like if I was elected president of America and started putting Jews in camps and the Democrats came out and said âAnglin isnât doing enough about the Jewish problem.â

This is as serious as it gets. Ukrainians will fight back. We would have war in Europe. https://t.co/WpFyUJLMKQ

ð¨ The United States has warned European allies that Russia could be plotting to invade Ukraine in a repeat of the 2014 annexation of Crimea.

Tens of thousands of Russian troops have amassed near the borderhttps://t.co/2OxCJSG5YJ

Carlson: "Why would we take Ukraine's side? Why wouldn't we be on Russia's side? I'm totally confused."

As CNN first reported, the US began sounding the alarm last week w/ European allies and NATO about Russiaâs military activity near Ukraine.
âIt would be foolish for us not to be considering the possibility of an invasion or incursion,â a US official said.https://t.co/2bGuldZDhA pic.twitter.com/hnnAYNaQRc

GOP definitely NOT the Party of Reagan anymore: "Tucker: âWhy Would We Take Ukraineâs Side and Not Russiaâs?â" https://t.co/1hTRQyDdqF via @thedailybeast

âBut, but why would we take Ukraineâs side and not Russiaâs side,â Tucker asks GOP Rep. Mike Turner. https://t.co/30wjP3Hhbk

Russiaâs aggression in Ukraine is now in its eighth year. We call on Russia to cease its aggression, observe the ceasefire, implement its Minsk commitments, and withdraw its forces from Ukraineâs sovereign territory. https://t.co/fF8Nzlqoow pic.twitter.com/0ZDox2Egpr

The agenda is also supported by Republican poop-eater Richard Grenell.

CNNâs @JohnBerman is told by Brian Klaas that Putin is amassing troops in Ukraine and his response? Donald Trump and January 6. 

I go back and forth on whether the Jews are planning to attack Russia, China or Iran first. In my own defense, they themselves seem confused about which they want to target. In fact, I donât think they have the spine to target any of them, so they are just driving these warships around the globe hoping someone cracks.