Lowering in remotely detonated bombs seems to make the most sense. Otherwise, youâd either way to send someone down there in a scuba suit, or youâd have to shoot the pipes with some kind of torpedo.

The Nord Stream 1 and 2 pipelines may have been sabotaged by a remotely detonated underwater explosive device, Sky News reported on Wednesday citing a UK defense source.

The Russian natural gas pipelines might have been breached by mines lowered to the seabed on a long line, or explosives dropped from a boat or planted by an undersea drone, and the bomb may have been placed âmonths or even years ago,â the report says.

The source added that the explosives were unlikely to have been planted by a Russian submarine, as the Baltic Sea is relatively shallow, making such a clandestine operation not hard to detect.

However, the source said that âa suspected act of sabotageâ was âpossiblyâ carried out by Russia, without providing any evidence to support this claim.

Earlier, Russia voiced its concern over the rupture of its pipelines, saying it could have grave consequences for energy supplies to the âentire continent,â and called for an immediate investigation into the matter. It also denounced any allegations that it had orchestrated an act of sabotage as âstupid and absurd.â

Sky News asked one of the Danes about this âtheoryâ that the Russians did the bombing. He flinched.

"This is an international matter"

Danish Foreign Minister Jeppe Kofod says the "huge explosions" that caused leaks to the Nord Stream pipeline were "intentional" and that countries across the EU and NATO are working together to "establish the facts"https://t.co/GnNdnsovKc pic.twitter.com/xkeMZyNpv5

Europe has been an American vassal state since the end of World War II, but before they were at least prosperous. Now the US is telling them to freeze, and when they say theyâre not sure they want to freeze, the US bombs their pipes. 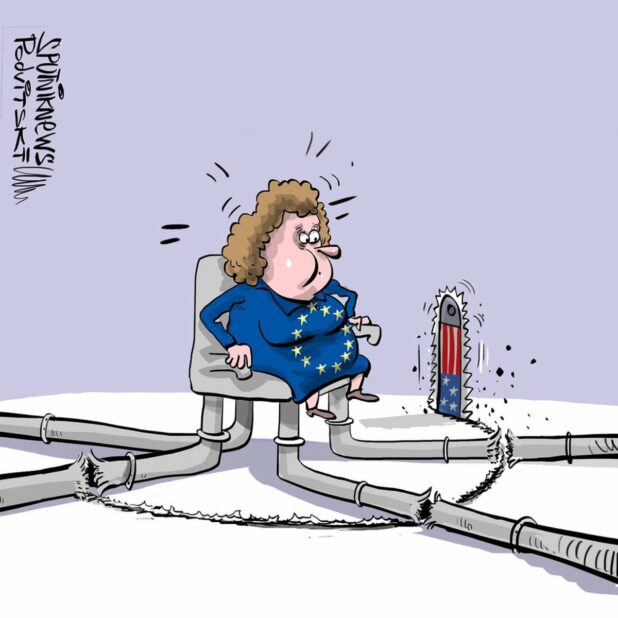 A fourth rupture was just detected by Sweden.

The Swedish coast guard has said itâs discovered a fourth Nord Stream gas pipeline leak. The key infrastucture was damaged earlier this week in an alleged act of sabotage.

Initially, it was believed that the pipelines at the bottom of the Baltic Sea were damaged in three locations, with two strings of Nord Stream 1 and Nord Stream 2 being affected.

But Swedish coast guard spokesperson Jenny Larsson told the Svenska Dagbladet newspaper on Thursday that there were in fact four leaks in the undersea infrastructure. âTwo of these four are in Swedenâs exclusive economic zone,â Larsson said, adding that the two others were in the Danish exclusive zone.

They are saying that this cannot be repaired.

If the damage is not repaired quickly enough, too much salty sea water could run into the pipes lying at the bottom of the Baltic Sea and irreversibly corrode them, German officials have warned, according to the news media outlet. Denmark said on Wednesday that its authorities would be able to launch a probe into the issue no sooner than in a week or two due to âsafety concerns,â Tagesspiegel added.

The media outlet does not mention any plans for repair work by either Russia or Germany.

A group of senior German MPs were quick to point the finger at Russia and blame Moscow for the incident. âAn attack on the energy supply infrastructure is intended to spread fear and terror,â Roderich Kiesewetter, a German MP and spokesman for crisis prevention for the Conservative Union parliamentary group, told the RND media group.

The media is going to keep claiming that it was Russia, despite how nonsensical this is.

They can just keep saying it, and it will have an effect of muddying the conversation. It has this effect even when everyone knows itâs a lie. Simply blasting out a lie confuses people.

Along with Tucker Carlson and others, Marjorie Taylor Greene is saying that the US did it.

The Biden admin has fully ignored the onslaught of illegal aliens invading our border and the shocking amount of deadly fentanyl killing record numbers of Americans, yet has used BILLIONS of Americanâs taxpayer dollars to fund a war in Ukraine in what appears to be..

Who would benefit from blowing up a pipeline delivering energy to Europe?

Apparently the global warming people do not care about this gas being pumped into the atmosphere. I have not seen Greta attack the US government for doing this pipe bombing.

Iâm not an expert in piping, but this is clearly a massive amount of methane gas leaking into the atmosphere. Itâs probably not good for the sea. 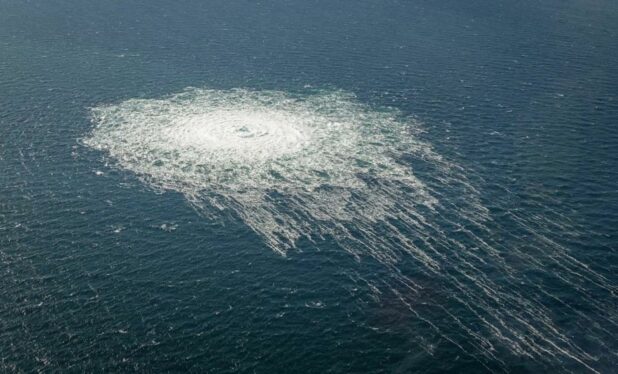 Maybe they should light it on fire, so there would be torches on top of the sea? Would that work? It would just be like a stovetop, no?

Just hours before the explosion, Germans were protesting, demanding that the pipes be turned back on.

Thousands of people in Gera in Germany against Olaf Scholz's policy and the explosion of energy and gas prices. They demand an end to sanctions on Russia and the reopening of the Nord Stream 2 gas pipeline. Demonstrations also in other German cities but EU media censors them. pic.twitter.com/dmTMLY11jn

Let there be GAS ð©ðª â free-thinking Germans demand opening of Nord Stream 2 gas pipeline â and for restoration of ties with Russia, which have existed for centuries â with current policy settings ensuring US companies will profit from Germany's de-industrialization pic.twitter.com/59SuEf2tzi

Meanwhile in Russia: every state TV program is feasting on Tucker Carlson's accusations that the Biden administration is somehow involved in causing the Nord Stream damage. Military expert loved Tucker's idea about cutting undersea internet cables & said, "Sure, why not?" Watch: pic.twitter.com/bDVwl2Z7yN

The US is now totally at war with Russia. No one can keep saying âoh well, weâre in a proxy war, which is somehow not a real war somehow.â When youâre blowing up a countryâs pipes, youâre at war.

Of course, I was saying before this that we were at war with Russia. The Ukraine thing is such a moronic hoax. Joe Biden goes out there and says Russia is trying to exterminate the Ukraine race, but Vladimir Putin has said very frankly that Russiaâs only goal is to liberate the Donbass and make sure the Ukraine doesnât join NATO. They could have ended this before it started. Itâs a totally voluntary war, an elective war, meant to hurt Russia, to try to do a regime change in Russia.

The stakes keep getting higher with every escalation. • Replies: @Fred777
• Thanks: A B Coreopsis
← Russia Says US Probably Sabotaged the P...NATO Chief Says Pipeline Attacks Are an... →
Current Commenter
says:
Current Date at Time Now
Leave a Reply - Comments on articles more than two weeks old will be judged much more strictly on quality and tone
Cancel Reply
Commenting Disabled While in Translation Mode