Apparently, these people want to suggest that it was Russia, but these are literally Russiaâs pipes, and they could shut them off any time they wanted to. The pipes were shut off already when they were bombed.

Where are we going with this, NATO?

NATO said that a series of leaks on the Nord Stream pipelines between Russia and Europe were the result of sabotage and that attacks on its membersâ infrastructure would be met with a collective response from the military alliance.

The statement, from the North Atlantic Council, the decision-making body of the North Atlantic Treaty Organization, didnât provide details or evidence. It also noted that the damage to the pipelines occurred in international waters. But it marks the first time the alliance has formally warned that it would deter and defend against attacks on its membersâ critical infrastructure following the now four documented leaks in the Nord Stream and Nord Stream 2 pipelines.

NATO Secretary-General Jens Stoltenberg separately wrote on Twitter that the sabotage on the pipelines was of âdeep concern.â

The sabotage of the Nordstream pipelines is of deep concern. #NATO is committed to deter and defend against hybrid attacks. Any deliberate attack against Alliesâ critical infrastructure would be met with a united and determined response. https://t.co/XSiqWK20xF

âNATO is committed to deter and defend against hybrid attacks,â he wrote. âAny deliberate attack against Alliesâ critical infrastructure would be met with a united and determined response.â

At a NATO meeting Wednesday evening, Danish officials said the pipelines were damaged by several explosions Monday with the force of 500 kilograms of TNT (about 1,100 pounds), officials familiar with the discussions said.

Swedish and Danish authorities said Thursday that a total of four leaksâtwo in the waters of each countryâhad been verified. The Swedish Coast Guard said the fourth leakâthe second in Swedish waters-âwas discovered earlier this week around the same time as the first. The second leak is smaller, and emissions from that leak are weakening, according to the agencyâs ongoing surveillance of the site.

The aftermath of the leaks threatens to expand the theater of the conflict in Ukraine, which so far has mostly been confined to Ukraineâs borders, and to conflate it with the economic war playing out between Russia and the West. While the incidents donât affect Europeâs gas supplyâthe pipelines arenât now in useâthey have raised fears about the security of the continentâs energy systems as governments work to build up their gas supplies for the winter.

Yeah, this is an obvious escalation. Russia escalated by doing the mobilization, now the West has escalated by bombing the pipeline.

Itâs very simple: Europe no longer has any reason to sue for peace with Russia, because the reason they would want peace is to fix the energy crisis. With the pipeline bombed out and presumably permanently destroyed, there is now no reason to reestablish the status quo with Russia.

The North Atlantic Council, which consists of representatives from all 30 NATO governments, didnât name a culprit behind the Baltic Sea leaks, though officials in several member countries have already attributed the destruction to Russia, without providing evidence.

Russia has denied involvement in the damage to the pipeline and the Kremlin has called it âa terrorist attack, possibly at the state level.â

Presidential spokesman Dmitry Peskov told reporters Thursday that much more NATO than Russian hardware is in the area where the pipeline leaks have occurred.

âThis area is the Baltic Sea. There were many more aircraft, ships or other marine vehicles from NATO countries there,â he said. âSo, these reports [of Russiaâs involvement] are absolutely ridiculousâ¦and biased.â

The council didnât say how it arrived at its assessment that the damage, which it said has caused environmental fallout and shipping disruptions.

It said the military alliance would be prepared to defend its infrastructure from attacks by both foreign governments and individuals acting without explicit state backing.

âAll currently available information indicates that this is the result of deliberate, reckless, and irresponsible acts of sabotage,â the council said. âWe, as Allies, have committed to prepare for, deter and defend against the coercive use of energy and other hybrid tactics by state and non-state actors.â

U.S. officials said they were ready to help investigate the leaks.

Itâs obvious that theyâre going to wait a little bit, claim they did an investigation, then blame Russia. From there they will start attacking Russia in various new ways. They will probably sabotage Russian infrastructure.

This is the big move to get the war out of the Ukraine, where itâs not really going very well for NATO, and move it to multiple new theatres where they believe they will have the advantage.

This whole Ukraine debacle was always just the opening act to a World War.

People should be aware. There is nothing anyone can do to slow or stop this war, but if you know there is a World War coming, you are probably going to make different life decisions than if a World War was not coming. 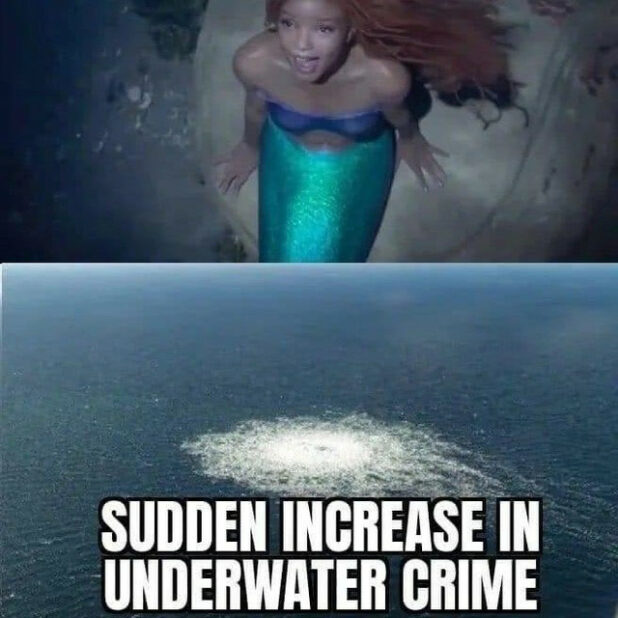