Pictured: A man who puts on a shirt when itâs appropriate vs. a man who simply refuses to put on a shirt.
◄►Bookmark◄❌►▲ ▼Toggle AllToC▲▼Add to LibraryRemove from Library • BShow CommentNext New CommentNext New ReplyRead More
ReplyAgree/Disagree/Etc. More... This Commenter This Thread Hide Thread Display All Comments
AgreeDisagreeThanksLOLTroll
These buttons register your public Agreement, Disagreement, Thanks, LOL, or Troll with the selected comment. They are ONLY available to recent, frequent commenters who have saved their Name+Email using the 'Remember My Information' checkbox, and may also ONLY be used three times during any eight hour period.
Ignore Commenter Follow Commenter
Search Text Case Sensitive  Exact Words  Include Comments
List of Bookmarks

Elon Musk tweeted out a couple of the basic facts of the Ukraine conflict, explaining a road to peace. He said that the referenda in the four recently annexed regions could be redone under UN supervision, Russia could keep Crimea, and the Ukraine remain neutral.

He attached a poll, and only 40% of respondents agreed with him on this plan. The other 60% want endless war and death for no reason other than that it feels good to agree with the television. 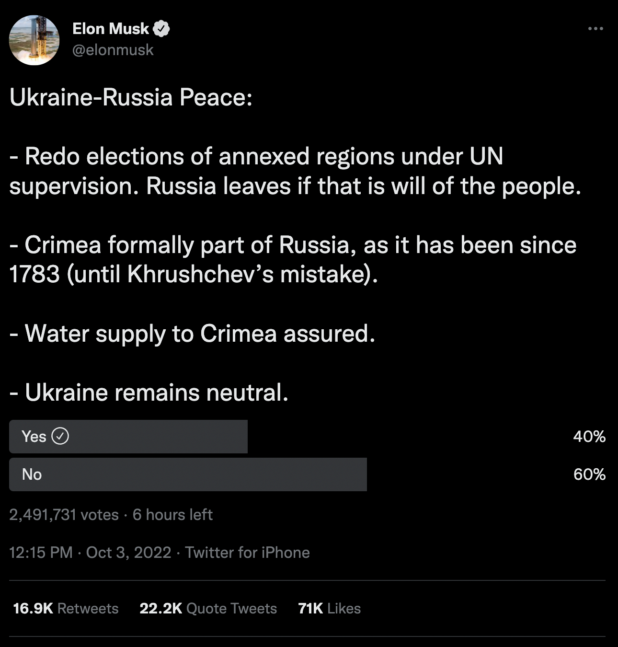 Under the poll, Musk noted that this was going to be the outcome regardless, and all we are doing by denying it is prolonging the inevitable, while also risking nuclear war.

Also worth noting that a possible, albeit unlikely, outcome from this conflict is nuclear war

People donât care about nuclear war, any more than they care about however many thousands of Ukraine people dying. They just only care about agreeing with CNN and Fox News.

The Big Bad Jew Zelensky actually responded to Musk, doing his own Twitter poll asking if Musk should support Russia or his fake country of âThe Ukraine.â 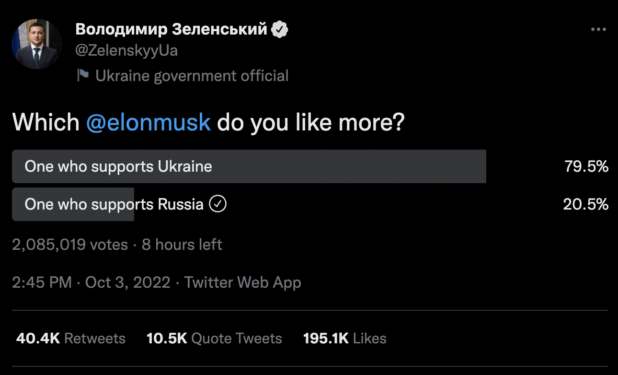 Obviously, that is just total bullshit. Attacking Musk for âsupporting Russiaâ because he wants peace is just disgusting and evil. Itâs very, very Jewish. Remember when the Jews were sending us to fighting those Moslems for no reason, and then if you said anything about it, they called you a âterrorist sympathizerâ? Remember when they said you support 911 if you donât think we should send our young men to die, get mangled, and have their brains all screwed up fighting Iraq for no reason?

Itâs the same thing. Looking for a solution that will bring about peace is an objective thing, which does not favor either side. What Musk said is a fair path, and one that would work. Russia would agree to a UN-observed redo of votes in the regions theyâve annexed. Zelensky is saying that Russian speakers in the East of the country donât have a choice, and have to be forcibly enslaved by Kiev.

The UN has a designation for Russians within the Ukraineâs borders: they are ânon-self-governing people.â The official process the UN uses in these situations is referenda on self-government. The Kiev government does not have a right to force these people to live under their rule. No one thinks they have that right.

After the rats came out in force for his first poll, Elon did a second one, asking the question in a clearer way for the idiotic retards.

He is barely winning that one. Apparently, more than 40% of people â democracy believers all â think it is fine to forcibly rule a foreign people, against their will.

This is what Iâve been telling you: all ideology is a hoax. These are the same people who will claim America doesnât have a right to exist because we âstoleâ land from the Indians. Theyâre the same people who think millions of foreigners should be allowed to flood white countries against the will of the local population because itâs sad that theyâre poor. Surely, they also support the âindependenceâ of Moslems in Kosovo. Remember that just recently, they were claiming that the Kurds should have their own state in Syria.

If they would just say âwe support Jewish dominance of the world,â then okay. Thatâs fair enough. But they wonât say that. They go out there talking about âour values.â What are âour valuesâ? Like the rules of the rules-based order, they are changing constantly, from situation to situation. They shift as much as Western âmorality,â which has only promoted trannies for a few years and has now made it illegal to question trannies.

The people who actually believe in âour valuesâ are stupid monkeys. They do not have any clear image of âvalues.â All they have is the government and media telling them what to do. 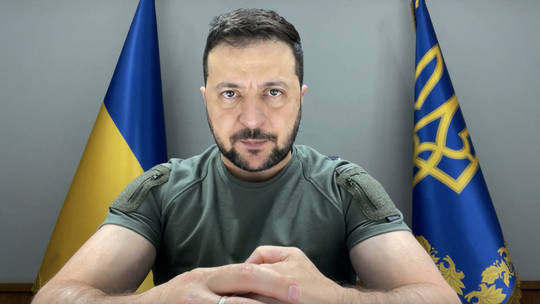 The war against Russia is not about values, it is about the center of power in the United States maintaining global dominance. Thatâs all itâs about.

That Jew Zelensky â who only wears T-shirts, by the way â just signed a decree saying he will never negotiate with Russia. This means he is going to keep sending people to die in a war, the purpose of which is to oppress people in the East of the country who do not want to be ruled by him, and to join NATO and put nuclear weapons on Russiaâs border to threaten them.

Russians have a right to exist. The US does not have any right to force its will on the entire planet. They do not cite any source of that right, beyond these shifting âvalues.â It would be one thing if this was like Warhammer 40k and America was claiming some kind of divine right to rule. But this isnât 40k, and theyâre claiming that they have a right to rule because they need to force everyone in the world to have gay sex and turn their kids into trannies.

Itâs extremely telling that all attempts at peace are denounced as âpro-Russia.â They have the whole thing locked down, using language, to the point where youâre not even allowed to talk about peace. The options are âendless war that is going to probably turn into World War III and involve nuclear weaponsâ and âyouâre metaphysically evil for questioning the border integrity of a former Soviet state.â

The fact is: anyone who is âstanding with the Ukraineâ is defending war for the sake of war. 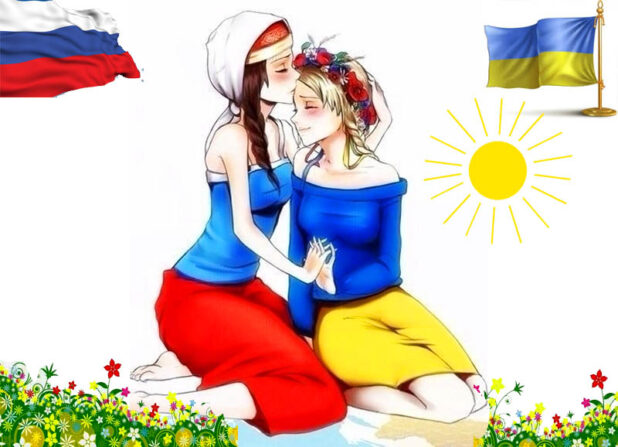 Elon Musk might be slightly right-wing, but claiming heâs a Russian shill is just dumb. If anything, Musk sees that this stupid, pointless war is going to screw-up his futurist agenda, as weâre now talking about the total collapse of the Western economy. Itâs logical that people involved in industry would be against that.

I called Musk a faggot for sending free internet to the Ukraine.

Rough data on Starlink's usage: around 150K active users per day. This is crucial support for Ukraine's infrastructure and restoring the destroyed territories. Ukraine will stay connected no matter what. pic.twitter.com/XWjyxPQJyX

This Jew Zelensky taking time out of his busy day of fashion shoots and meetings with celebrities to denounce Elon Musk as âpro-Russiaâ is one of the goofiest things weâve seen yet, and it speaks directly to how ridiculous this situation actually is.

The Westâs Hands in Ukraine Are as Bloody as Putinâs
Jonathan Cook
• 206 Comments • Reply
← Genius Strategist Petraeus Outlines Tot...Germany Is a Bitch Country. US Destroys... →
Hide 184 CommentsLeave a Comment
"Elon Musk Attacked for Trying to Bring Peace to the Ukraine"
• 184 Comments
Commenters to Ignore
Commenters to ignore (one per line)