One of my Twitter accounts became active for some reason, and I was using it.

I was planning on announcing this today in a happy manner, but I got this on Friday night: 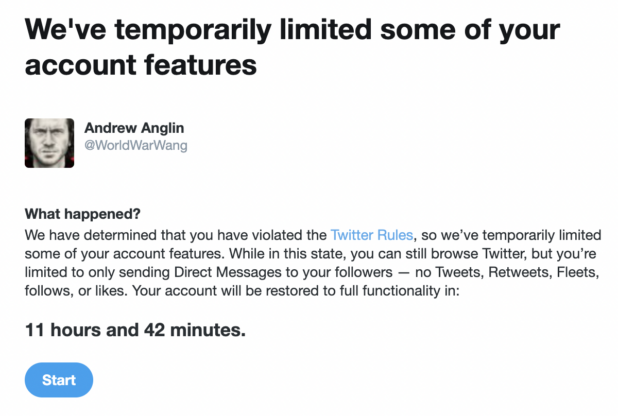 I was being very, very politically correct.

They didnât give me a reason. Itâs this same Kafka shit. If heâs going to ban me for being me, okay. Tell me that.

Just before my account got locked last night, there was a mob spamming and threatening to kill me because the media wrote some articles attacking Elon, claiming he personally unbanned me. He obviously didnât personally unban me, it was some kind of bulk action.

These unhinged people were very mad I was coming up on recommends.

The reason I was coming up on recommends is that I had very high engagement and I was trending. I got 3,000 followers in 16 hours. Thatâs not my fault.

Those weird obsessive people (strangers who I do not know) who were saying theyâre going to kill me (which is fine, apparently) were presumably also mass reporting me.

I'm not a Nazi, and even if I was, going around threatening to kill strangers on the internet is deranged.

The US government encourages these people, aggressively. https://t.co/cvafZeQIqP

Putting me in timeout after I was targeted with hundreds of death threats from emotionally damaged, stupid people who were hyped up by the media and various activist groups is ridiculous.

Frankly, if this is how these leftists do you, Iâm going to start reporting everyone who threatens to kill me. I never think to do anything like that, and I donât care about people threatening to kill me, but if theyâre going to ruin my evening by causing my account to lock, Iâm reporting them.

I was being very friendly and gentlemanly. People were threatening to kill me and I responded in a normal manner. The same death-threaters then mass reported me.

Frankly, there needs to be some kind of punishment for filing false reports. If thatâs whatâs going on here, it is the most clear-cut case ever, because no one has ever in history tweeted as carefully as I was tweeting.

No, I'm not doing anything like that until I know what the rules are. 

I can be the most politically correct person you've ever seen. https://t.co/cbz0O4FaqL

This is the report process: 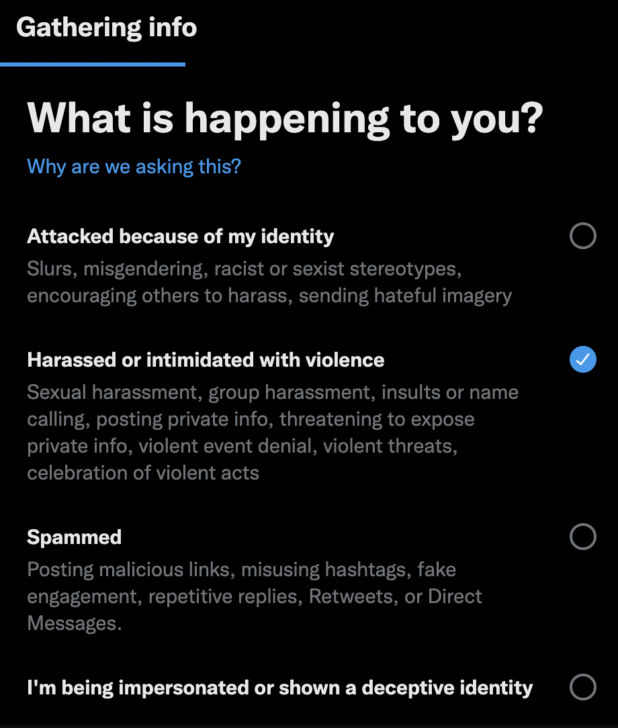 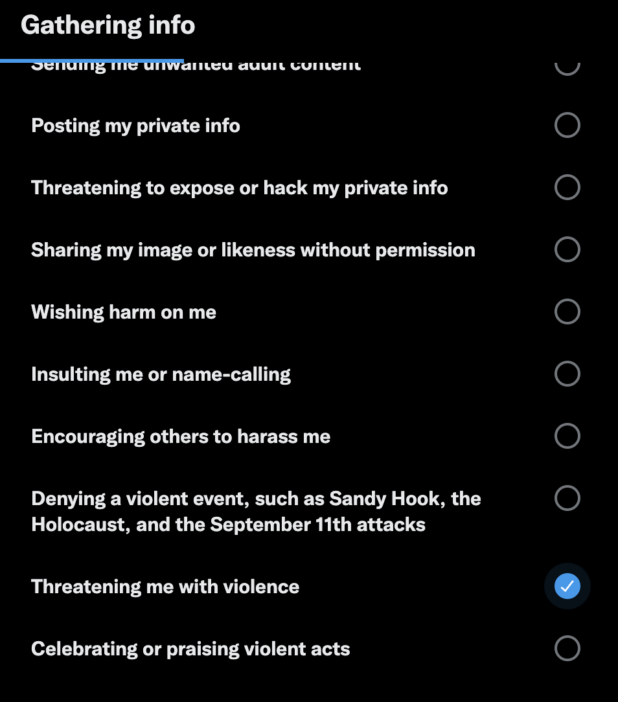 (Apparently you can report people for denying September 11th, which I did not know â I could have walked right into that one. Where is the rubble??)

At time of writing, Iâm gonna go ahead and give Elon the benefit of the doubt and suppose that they mass reported that I was doing something violent and my account was locked. If I am banned, then I was banned for being me, and that is evil and precisely no different than what that woman Vagina was doing when she was in charge.

(Also, Yeâs tweets are all gone, and this presumably means he is not on a temp suspension. Actually, itâs already been 12 hours for him, so he is definitely permabanned. I donât agree with that and I donât think itâs free speech, but I also think Elon might let him back on when he files the papers to run for president.)

Anyway, assuming I am not getting banned for being me (I did not post the Rael symbol or anything), and I will be back in 11 hours and 42 minutes, you can follow me @WorldWarWang.

Please be politically correct and do not do anything that makes me look bad.

If Elon or anyone else from Twitter is reading this (also for the lying media):

Seriously, Iâm not going to do anything bad. I was banned for a joke before, in 2015 or something. I should have the same chance as everyone else to post and not break the rules. There are a lot of eyes on this â I was trending and I have a lot of readers, but more than that, I was the first person banned from everything and am cited as a case study.

Yesterday's TimcastIRL guest was Darren Beattie, who runs the conspiracy site https://t.co/Rn0XzO3GSe and famously lost his White House job in 2018 for hanging out with white nationalists.

Here he is saying he wants Twitter to unban Andrew Anglin, a literal neo-Nazi: pic.twitter.com/6ncnvYyky4

Furthermore: I am telling people that the media is lying and Elon/Twitter did not restore me:

Dear everyone that is talking about me,

I was not personally reinstated by Elon Musk. It was some kind of bulk un-ban.

I'm following all the rules and will continue doing so. If I stop following the rules, I'm sure I'll be banned quickly.

I donât know what happened. I thought it was the amnesty thing Elon talked about. Itâs actually possible that this is a secondary account that was never banned. I only found out about it because a bunch of people were sending it to me and telling me it was restored.

The media should be able to check that. But they probably wonât. Brandy Zadrozny is not a real journalist, sheâs just a professional shill and liar. I saw her go out there and say that the fat, mentally disabled person who shot up the gay club was a right-wing Tucker Carlson believer. We all saw her do that. No one is surprised sheâs saying Elon personally restored my account.

The more I think about it, the more it seems possible that the account actually never was suspended and I just never realized it. When I turned it on Thursday night, I deleted the old tweets but the newest ones were from like 2013. The account that was suspended in 2015 might have been a âDaily Stormerâ official account. I think other people were using it, like a company account. But I canât remember the details of a series of events from nearly a decade ago. I definitely was not banned in 2013 like these news articles are for some reason saying. That is just a complete lie.

Bottom line: Iâm not trying to make any problems.

I don't want any trouble.

Also, just to be clear, referring to Tim Pool as âTim Puddleâ is one of the funniest things anyone has ever done.

Also, one more thing: I wasnât defending Hitler. These people just lie about stuff that is right in front of you. I was defending Ye, saying the actual fact that most voters do not care about what he said and it in itself isnât going to affect a democratic election. I was specifically responding to Tim Puddle claiming that Ye couldnât get elected after his AJ interview. This surely has to be fair game, as it is directly related to the 2024 election.

Wait, wait â one last thing: I am not a âneo-Naziâ and I donât even really understand what that term means. Those people threatening to kill me were saying I secretly want to kill everyone or whatever â itâs all very garbled. Itâs a kind of layered esoterica where they have identified my secret name and now they know me better than I know myself. The whole thing is pathological.

I did not do anything wrong.

I deleted all the old stuff that was on this account. I will strictly follow whatever the rules are. If I get banned, it's not for anything I said, it's just because I'm me. The Twitter Files
The Mechanism for Terminating Free Speech on the Internet has already been Put in Place
Mike Whitney
• 137 Comments • Reply
← Elon Publishes âTwitter Filesâ Show...Scott Adams Defends Ye, Nick Fuentes →
Hide 82 CommentsLeave a Comment
"Andrew Anglin Has Been Suspended from Twitter for 11 Hours and 42 Minutes"
• 82 Comments
Commenters to Ignore
Commenters to ignore (one per line)